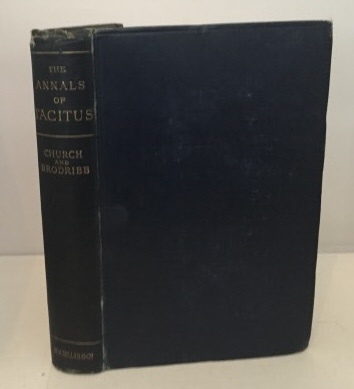 Annals Of Tacitus Translated Into English with Notes and Maps

The book is in Very Good- condition and is lacking a dust jacket. The book and its contents are in generally clean condition. The spine ends and corners of the book covers have some light bumping and rubbing. There is a smallish tear with fraying to the top spine end. There is some light generalized rubbing to the spine joints and rear cover. The text pages are clean and bright. There is a previous owner's inked name and date on the half title page. "Publius (or Gaius) Cornelius Tacitus (c. ? 56 – c. ? 120 AD) was a senator and a historian of the Roman Empire. The surviving portions of his two major works—the Annals and the Histories—examine the reigns of the Roman emperors Tiberius, Claudius, Nero, and those who reigned in the Year of the Four Emperors (69 AD). These two works span the history of the Roman Empire from the death of Augustus, in 14 AD, to the years of the First Jewish–Roman War, in 70 AD. There are substantial lacunae in the surviving texts, including a gap in the Annals that is four books long."

Title: Annals Of Tacitus Translated Into English with Notes and Maps

Annals Of Tacitus Translated Into English with Notes and Maps