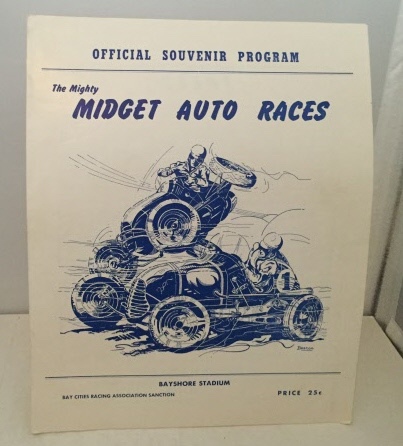 B&W Illustrations; This is an oversized booklet with illustrated self covers and a stapled spine. This booklet is in Very Good- to Very Good condition and was issued without a dust jacket. The covers have some crumpling from being held. Both spine ends have some beginning tears. The text pages are clean and bright. This copy includes handwritten notations on the entry list page, including times for some competitors races. The trophy dash pages with heats has been filled in (three pages worth). "Midget car racing was officially born on August 10, 1933 at the Loyola High School Stadium in Los Angeles as a regular weekly program under the control of the first official governing body, the Midget Auto Racing Association (MARA). After spreading across the country, the sport traveled around the world; first to Australia in 1934 at Melbourne's Olympic Park on December 15, and to New Zealand in 1937. Early midget races were held on board tracks previously used for bicycle racing. When the purpose built speedway at Gilmore Stadium was completed, racing ended at the school stadium, and hundreds of tracks began to spring up across the United States. Angell Park Speedway in Sun Prairie, Wisconsin (near Madison) is another major track in the United States operating since the first half of the twentieth century." "n 1931 the Oakland Speedway was built near Oakland, but actually was located between Oakland and nearby Hayward, California, on the site of what is now Bayfair Mall in San Leandro, California. Annually each fall the track hosted the "Oakland 500" race. Many of the local East Bay races were exhibited by the Bay Cities Racing Association (BCRA). In 1948 local East Bay driver Bob Barkhimer quit racing to become the Business Manager for BCRA. In 1949 Barkhimer took over San Jose Speedway and also started his own association (CSCRA) , and in 1954 he co-founded west coast NASCAR."