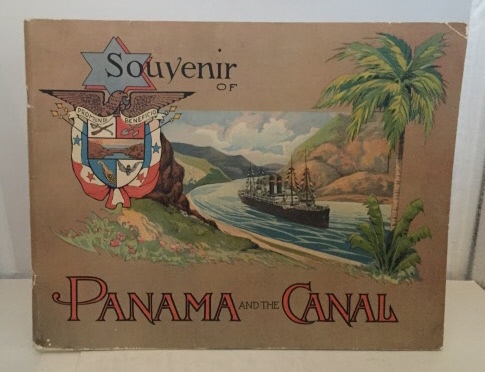 By: I. L. Maduro's Souvenir Store

B&W Illustrations; This is an oblong paperback book with illustrated cardstock covers and a stapled spine. The book is in Very Good condition and was issued without a dust jacket. The book and its contents are in generally clean, bright condition. There is some rubbing and wear to the spine ends, corners and edges of the book covers. There is some beginning tearing at the staples. The text pages are clean and bright. "The idea of the Panama canal dates back to the 1513 discovery of the isthmus by Vasco Nez de Balboa. The narrow land bridge between North and South America houses the Panama Canal, a water passage between the Atlantic and Pacific Oceans. The earliest European colonists recognized this potential, and several proposals for a canal were made. By the late nineteenth century, technological advances and commercial pressure allowed construction to begin in earnest. Noted canal engineer Ferdinand de Lesseps led an initial attempt by France to build a sea-level canal. Beset by cost overruns due to the severe underestimation of the difficulties in excavating the rugged Panama land, heavy personnel losses in Panama due to tropical diseases, and political corruption in France surrounding the financing of the massive project, the project succeeded in only partially completing the canal."

Title: Souvenir Of Panama And The Canal

By: Army Corps Of Engineers

The Lore Of Cathay Or the Intellect of China