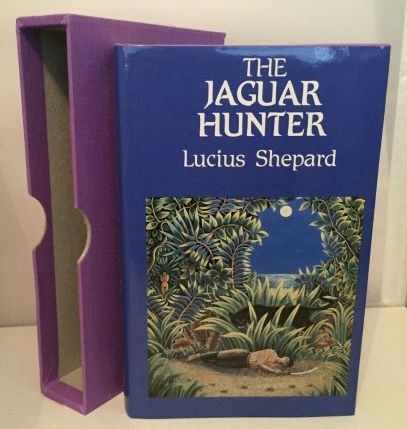 By: Shepard, Lucius (with A Foreword by Michael Bishop)

SIGNED EDITION. Boxed edition, limited to 250 copies, this is #213. The book is in Fine condition, has a Fine dust jacket and a Fine slipcase. This book is in Fine condition and has a Fine dust jacket. The book and its contents are in clean, bright condition. The text pages are clean and bright. The dust jacket is crisp and clean. "Lucius Shepard has won several awards for his science fiction: in 1985 he won John W. Campbell Award for best new writer, followed in 1986 with a best novella Nebula Award for his story "R&R", which later became part of his 1987 novel Life During Wartime. This novel won the Kurd-Lawitz-Preis in 1990. His novella "Barnacle Bill the Spacer" won a Hugo in 1993. His poem "White Trains" won the Rhysling Award in 1988. Two early collections of short stories won the World Fantasy Award for best collection: The Jaguar Hunter in 1988 and The Ends of the Earth Collection in 1992. His novella "Vacancy" won a Shirley Jackson Award in 2008." ; Signed by Author

Author Name: Shepard, Lucius (with A Foreword by Michael Bishop)