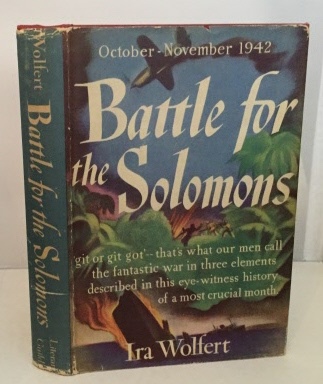 Battle For The Solomons (october-november 1942)

This book is in Very Good+ condition and has a Very Good+ dust jacket. The book and its contents are in clean, bright condition. The book and its contents are in generally clean, bright condition. There is some light bumping to the spine ends and corners of the book covers. The text pages are clean and bright. The price clipped dust jacket has several edge nicks and spots of rubbing, along with some light ground-in dirt to the rear cover. "The Solomon Islands campaign was a major campaign of the Pacific War of World War II. The campaign began with Japanese landings and occupation of several areas in the British Solomon Islands and Bougainville, in the Territory of New Guinea, during the first six months of 1942. The Japanese occupied these locations and began the construction of several naval and air bases with the goals of protecting the flank of the Japanese offensive in New Guinea, establishing a security barrier for the major Japanese base at Rabaul on New Britain, and providing bases for interdicting supply lines between the Allied powers of the United States and Australia and New Zealand."

Title: Battle For The Solomons (october-november 1942)

Battle For The Solomons (october-november 1942)