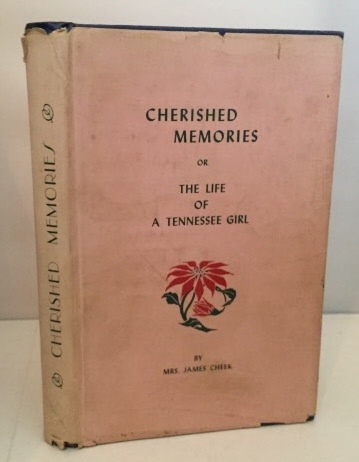 Cherished Memories Of the Life of a Tennessee Girl

B&W Illustrations; This book is in Very Good+ condition and has a Good dust jacket. The book and its contents are in generally clean, bright condition. The spine ends and corners of the book covers have some light bumping and rubbing. The text pages are clean and bright. The dust jacket has several edge tears, nicks and medium sized chips missing. "Prior to the arrival of white settlers in present-day Sevier County in the mid-18th century, the area had been inhabited for as many as 20,000 years by nomadic and semi-nomadic Native Americans. In the mid-16th century, Spanish expeditions led by Hernando de Soto (1540) and Juan Pardo (1567) passed through what is now Sevier County, reporting that the region was part of the domain of Chiaha, a minor Muskogean chiefdom centered around a village located on a now-submerged island just upstream from modern Douglas Dam. By the late 17th-century, however, the Cherokee whose ancestors were living in the mountains at the time of the Spaniards' visit had become the dominant tribe in the region. Although they used the region primarily as hunting grounds, the Chicakamauga faction of the Cherokee vehemently fought white settlement in their territory, frequently leading raids on households, even through the signing of various peace treaties, alternating short periods of peace with violent hostility, until forcibly marched from their territory by the U. S. Government on the "Trail of Tears." "

Title: Cherished Memories Of the Life of a Tennessee Girl

Cherished Memories Of the Life of a Tennessee Girl