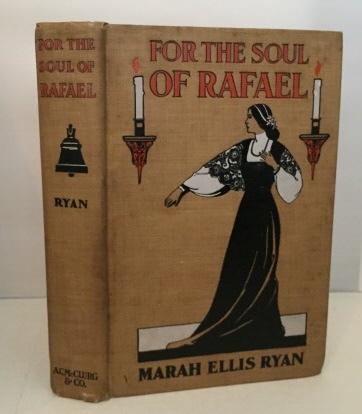 B&W Illustrations; This book is in Very Good condition and is lacking a dust jacket. The book and its contents are in generally clean, bright condition. The spine ends and corners of the book covers have some light bumping and rubbing. There are several spots of foxing, mostly to the front cover. The front cover and spine are illustrated in black, red and white. The text pages are mostly clean and bright. The tipped on illustration for the frontispiece is gone, though all other 18 tipped on illustrations are in clean bright condition. There is an ink stamped previous owner's name and address on the front endpaper. The margins of all the text pages are illustrated in tan / sepia with designs by Ralph Fletcher Seymour. "Marah Ellis Ryan (1860? 1934) was an author, actress, and activist from the United States. She was born either February 27, 1860 or 1866. As "Ellis Martin", she married Samuel Erwin Ryan (b. 1834) , an Irish actor and comedian, in 1883. She became a popular author, actress, and activist for Native Americans at the turn of the 20th century." "Mrs. Ryan went to live among the Hopi Indians twenty-five years ago and claimed to be the only white woman ever admitted to the secret religious rites. She was noted as an authority on the tribal life of the Indians in the United States and Mexico. " "The Story. The story of "For the Soul of Rafael" begins when Miss Young, as Marta Estavan, is ready to leave the convent where she has been reared. Dona Luisa Artega, mother of Rafael and the young girl's guardian, arranges a marriage between the two, because she thinks that Marta's influence will rescue her son from the wild life he is leading and make a man of him. Marta rescues the American Bryton, when he is attacked by Indians, and falls in love with him. Rafael's mother sends Bryton away by telling him that the girl has entered a convent for life, and after telling Marta that Bryton had been killed on the trail she exacts a vow from the girl that she will marry her son."

Title: For The Soul Of Rafael

Illustrator: Illustrated by Harold a Taylor and Ralph Fletcher Seymour