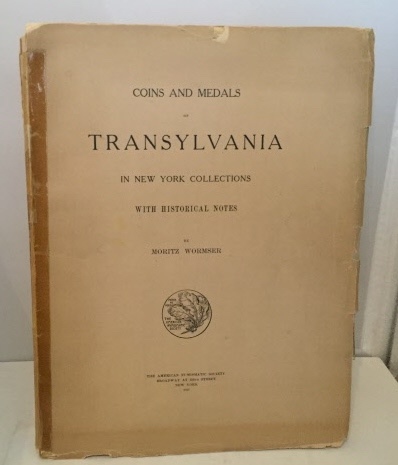 B&W Illustrations; This is an oversized paperback book with cardstock covers and a glued spine." Fifty copies reprinted from the American Journal of Numismatics Volume XLVIII" The book is in Fair only condition and was issued without a dust jacket. The spine, spine joints and inner hinges have been repaired with clear tape by a former owner. The edges of the covers have tearing, chips missing and generalized toning. The text pages are clean and bright. This copy has been signed on the title page by the author, with a short inscription. "Born in Heidelberg, Germany. He came to New York in 1896. Graduate of Columbia University in 1899 and received M. A. From Columbia in 1903. Married to Adele Zellner. She died in 1920. They had three children including Charles. He married Sallie Marks Levitch August 7, 1922, shortly before the ANA convention. Employed in civil engineering until 1911 and later banking in New York City until 1935. He began collecting at age 13. Served on ANA board 1917 to 1932 and 1935 to 1937. He was chairman of the board 1919 to 1921. Served as 14th ANA President August 25, 1921, to August 26, 1926. In 1924 the ANA presented him with a gold medal with his portrait. Design was by J. M. Swanson and struck by the Medallic Art Company. His five year term in office was the longest up to that time (or since). "; Signed by Author

Title: Coins And Medals Of Transylvania In New York Collections With Historical Notes