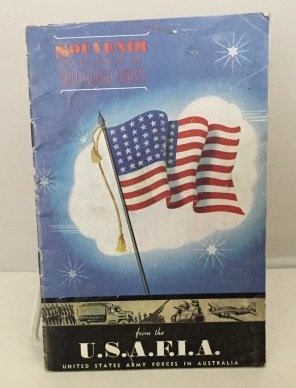 B&W Illustrations; This is a small format paperback book with illustrated covers and a stapled spine. The book is in Very Good condition and was issued without a dust jacket. The spine ends and corners of the book covers have some light bumping and rubbing. The covers have some overall rubbing and there are creases to the corners. The text pages are clean and bright. There is a previous owner's inked name on the rear inside cover. "The 23rd Infantry Division, more commonly known as the Americal Division, of the United States Army was activated 27 May 1942 on the island of New Caledonia. In the immediate emergency following Pearl Harbor, the United States had hurriedly sent three individual regiments to defend New Caledonia against a feared Japanese attack. This division was the only division formed outside of United States territory during World War II."

Title: Souvenir Of The Land Of The Southern Cross