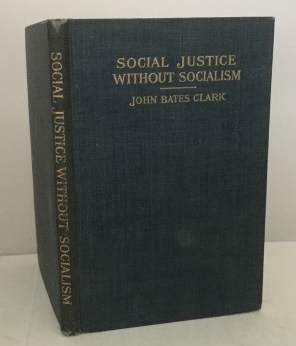 This book is in Very Good+ to Near Fine- condition and is lacking a dust jacket. The book and its contents are in clean, bright condition. There is some light rubbing and beginning loss of color to the spine ends and corners of the book covers. The text pages are clean and bright. "This series will contain essays by representative scholars and men of affairs dealing with the various phases of the moral law in its bearing on business life under the new economic order, first delivered at the University of California on the Weinstock Foundation." "John Bates Clark (January 26, 1847 March 21, 1938) was an American neoclassical economist. He was one of the pioneers of the marginalist revolution and opponent to the Institutionalist school of economics, and spent most of his career teaching at Columbia University." "Although the central concept of marginalism is that of marginal utility, marginalists, following the lead of Alfred Marshall, drew upon the idea of marginal physical productivity in explanation of cost. The neoclassical tradition that emerged from British marginalism abandoned the concept of utility and gave marginal rates of substitution a more fundamental role in analysis. Marginalism is an integral part of mainstream economic theory." Clark is best known for his book The Distribution of Wealth. There are only three copies of this book listed in Worldcat and no "real" copies (other than P. O. D. S) available through the trade.