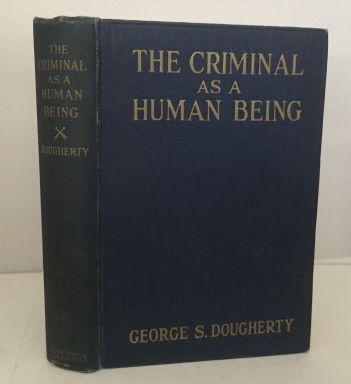 The Criminal As A Human Being

This book is in Very Good condition and is lacking a dust jacket. The book and its contents are in generally clean, bright condition. The spine ends and corners of the book covers have some light bumping and rubbing. The text pages are clean and bright. Both endpapers have noticeable toning. "George Samuel Dougherty (April 5, 1865 – July 16, 1931) was an American law enforcement officer, detective and writer. He was considered one of the leading detectives in the United States, first for the Pinkerton Detective Agency and then as a private investigator, and was responsible for the capture of many notorious criminals during the late 19th and early 20th centuries. While serving as Second Deputy Police Commissioner and head of the NYPD Detectives Bureau, he is credited for his assistance in solving the 1912 murder of Herman Rosenthal which ultimately resulted in the conviction and execution of the Lenox Avenue Gang and NYPD police detective Lieutenant Charles Becker. He also introduced the modern-day fingerprinting to the police force."

Title: The Criminal As A Human Being

The Criminal As A Human Being