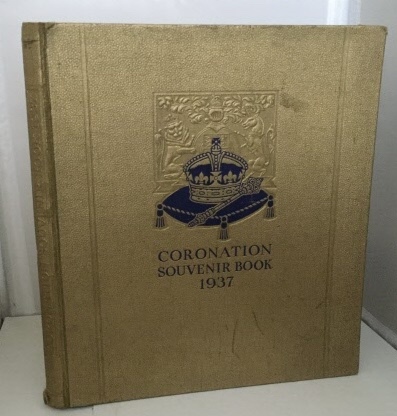 B&W Illustrations; This is an oversized hardback book (coffee table sized book) . The book is in Very Good- condition and is lacking a dust jacket. The spine ends and corners of the book covers have edge wear, bumping and rubbing. The bottom spine joints have some tearing and fraying. The text pages are clean and bright. Both front and rear endpapers have light, but noticeable foxing , especially at the edges. The frontispiece is in full color. "The coronation of George VI and Elizabeth Bowes-Lyon as King and Queen of the United Kingdom and the Dominions of the British Commonwealth and as Emperor and Empress of India took place at Westminster Abbey, London, on 12 May 1937. George VI ascended the throne upon the abdication of his brother, Edward VIII, on 11 December 1936, three days before his 41st birthday. Edward's coronation had been planned for 12 May 1937 and it was decided to continue with his brother and sister-in-law's coronation on the same date."