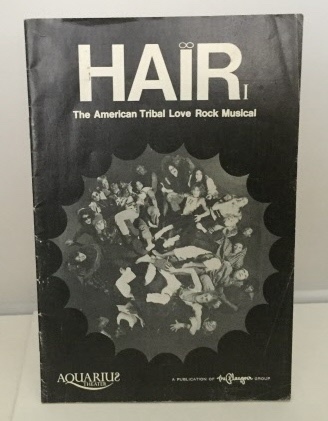 B&W Illustrations; This is the play program for the First westcoast production of Hair following the Broadway production six months earlier. This is a trade sized booklet with illustrated cardstock covers and a stapled spine. The booklet is in Very Good+ condition and was issued without a dust jacket. The spine ends, spine joints and corners of the covers have rubbing and light creasing. The text pages are clean and bright, though slightly toned. This production included Ben Vereen and Tom Smothers in the cast. The booklet includes black and white photos of the main castmembers, advertising that coincides with either the production or the hippy lifestyle. There's a blurb about the Aquarius Theatre and much more. "The West Coast version played at the Aquarius Theater in Los Angeles beginning about six months after the Broadway opening and running for an unprecedented two years. The Los Angeles tribe included Rado, Ragni, Robert Rothman, Ben Vereen (who replaced Ragni) , Red Shepard, Ted Neeley (who replaced Rado) , Meat Loaf, Gloria Jones, Táta Vega, Jobriath, Jennifer Warnes, and Dobie Gray. There were soon nine simultaneous productions in U. S. Cities, followed by national tours. Among the performers in these were Joe Mantegna, André DeShields, and Alaina Reed (Chicago) , David Lasley, David Patrick Kelly, Meat Loaf, and Shaun Murphy (Detroit) , Arnold McCuller (tour) , Bob Bingham (Seattle) and Philip Michael Thomas (San Francisco)."

By: Taylor, Lewis W. and I. Michael Lerner and University Of California Berkeley

Scrap And How to Collect It....