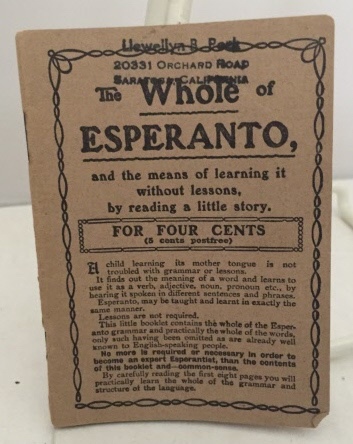 The Whole Of Esperanto And the Means of Learning it Without Lessons, by Reding a Little Story

By: The American Esperantist Co. Inc.

C1910. This is a small format paperback book / booklet (approx. 4" x 3") with cardstock covers and a stapled spine. The book is in Very Good- condition. The bottom spine end has tearing and a bit of beginning rubbing. The text pages are clean and bright. There is a previous owner's ink stamped name and address on the front cover of the booklet. The text pages are mostly clean and bright, though with some beginning generalized toning. This small booklet teaches beginning Esperanto with basic grammatical elements, alphabet, and a beginning story. "Esperanto is a constructed international auxiliary language. L. L. Zamenhof, a Polish-Jewish ophthalmologist, created Esperanto in the late 19th century and published the first book detailing it, Unua Libro, in 1887 under the pseudonym Doktoro Esperanto, Esperanto translating as "one who hopes". His original title for the language was simply the international language (lingvo internacia) , but early speakers grew fond of the name Esperanto and began to use it as a name for the language in 1889, which quickly gained prominence and has been used as an official name ever since."

Title: The Whole Of Esperanto And the Means of Learning it Without Lessons, by Reding a Little Story

The Whole Of Esperanto And the Means of Learning it Without Lessons, by Reding a Little Story