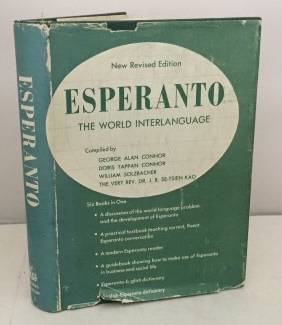 This book is in Very Good+ condition and has a Very Good- dust jacket. The book and its contents are in clean, bright condition. The spine ends and corners of the book covers have some light bumping and rubbing. The text pages are clean and bright. The dust jacket has edge wear, several small edge tears, nicks and a couple of small chips missing. The bottom front dust jacket flap has been clipped (but not price clipped). "Esperanto grew throughout the 20th century, both as a language and as a community of speakers, despite speakers facing persecution in regimes such as Nazi Germany. Esperanto speakers continued to establish organizations and publish periodicals tailored to specific regions and interests. In 1954, the United Nations granted official support to Esperanto as an international auxiliary language in the Montevideo Resolution. Several writers have contributed to the growing body of Esperanto literature, including William Auld, who received the first nomination for the Nobel Prize in Literature for a literary work in Esperanto in 1999, followed by two more in 2004 and 2006. "