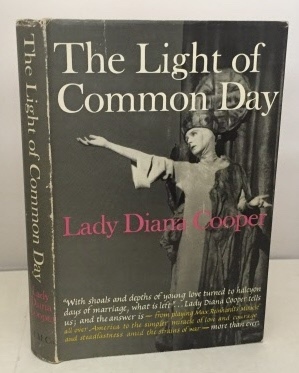 The Light Of Common Day

B&W Illustrations; This book is in Very Good+ condition and has a Very Good- dust jacket. The book and its contents are in generally clean, bright condition. The spine ends and corners of the book covers have some light bumping and rubbing. The text pages are clean and bright. The dust jacket has several semi-closed tears , noticeable rubbing to the spine joints and spots of ground-in dirt. "Diana Olivia Winifred Maud Cooper, Viscountess Norwich (née Lady Diana Manners; 29 August 1892 – 16 June 1986) was a famously glamorous social figure in London and Paris. As a young woman, she moved in a celebrated group of intellectuals known as the Coterie, most of whom were killed in the First World War. She married one of the few survivors, Duff Cooper, later British Ambassador to France. After his death, she wrote three volumes of memoirs which reveal much about early 20th-century upper-class life."

Title: The Light Of Common Day

The Light Of Common Day