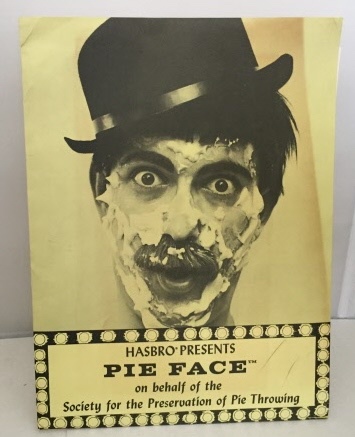 B&W Illustrations; This is a promotional folder which was sent out to newspaper stations to help introduce the new PIE Face game. The folder is in clean condition, though there is noticeable toning to the front cover and several spots of foxing / discoloration on the rear cover. Included are three promotional photographs with blurbs attached, and two press release notices, all of which are in clean, bright condition. "The hilarious Pie Face game is filled with fun and suspense, and somebody's bound to get surprised! Players load the arm with whipped cream (not included) or the included sponge, then take turns sliding their heads through the mask and spinning the spinner. But, watch out! The game unit could go off at any time giving someone a face full of whipped cream! (Whipped cream not included. ) "

Title: Hasbro Presents Pie Face On Behalf of the Society for the Preservation of Pie Throwing

Hewlett-packard: Fifty Years Of Looking To The Future