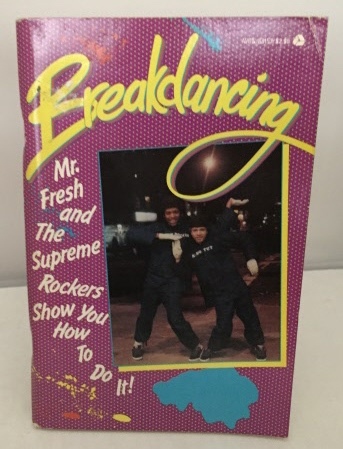 By: Mr. Fresh and The Supreme Rockers

B&W Illustrations; This is a trade sized paperback book with illustrated cardstock covers and a stapled spine. The book is in Very Good+ condition and was issued without a dust jacket. There is one small nick / bump to the bottom spine end of the book cover. The text pages are clean and bright. "Breakdancing, also called breaking or b-boying/b-girling, is an athletic style of street dance. While diverse in the amount of variation available in the dance, breakdancing mainly consists of four kinds of movement: toprock, downrock, power moves, and freezes. Breakdancing is typically set to hip-hop, funk, and breakbeat music, although modern trends allow for much wider varieties of music along certain ranges of tempo and beat patterns. The dance style originated primarily among Puerto Rican and African-American youths (many of them former members of street gangs, such as the Black Spades, the Young Spades, and the Baby Spades) during the mid-1970s in the Bronx. The dance spread worldwide due to popularity in the media, especially in Canada, France, Germany, Japan, Russia, South Korea, and the United Kingdom."

By: Mazo, Joseph H. (Commentary by)

How To Become A Good Dancer

The Spirit And The Flesh