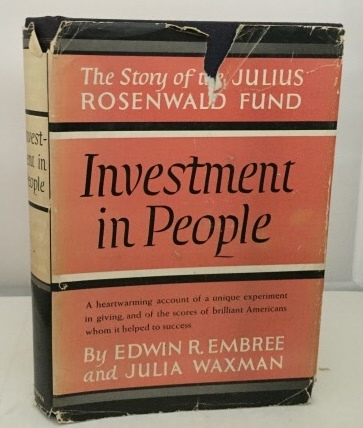 Investment In People The Story of the Julius Roesnwald Fund

By: Embree, Edwin and Julia Waxman

This book is in Very Good+ condition and has a Good only dust jacket. The book and its contents are in mostly clean, bright condition. The spine ends and corners of the book covers have some light bumping and rubbing. The dust jacket has several edge tears, nicks and wrinkles. There are several medium sized chips missing. "The Rosenwald Fund (also known as the Rosenwald Foundation, the Julius Rosenwald Fund, and the Julius Rosenwald Foundation) was established in 1917 by Julius Rosenwald and his family for "the well-being of mankind." Rosenwald became part-owner of Sears, Roebuck and Company in 1895, serving as its president from 1908 to 1922, and chairman of its Board of Directors until his death in 1932. He became interested in social issues, especially education for African Americans in the rural South, which was segregated and chronically underfunded. He provided funding through Dr. Booker T. Washington of the Tuskegee Normal and Industrial Institute (now known as Tuskegee University) , a historically black college (HBCU) , to support improving education for black children prior to founding the fund to establish a program to build rural schools for black children, primarily in the South."

Title: Investment In People The Story of the Julius Roesnwald Fund

Investment In People The Story of the Julius Roesnwald Fund