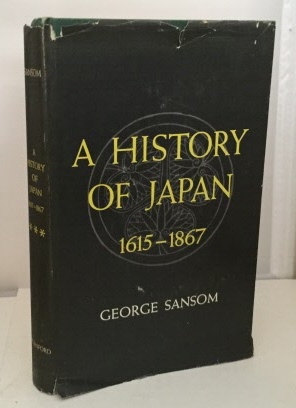 B&W Illustrations; This book is in Very Good+ condition and has a Very Good- dust jacket. The book and its contents are in generally clean, bright condition. The spine ends and corners of the book covers have some light rubbing and bumping. The text pages are clean and bright. There is a bit of a musty / dusty smell to the text pages. The dust jacket has several small edge nicks and tears, along with several chips missing. "Sansom returned to Japan in January 1920 as Secretary to Sir Charles Eliot, whose interest in Japanese Buddhism spurred Sansom's own interest in Japanese history and culture. He was thus encouraged to follow in the footsteps of his scholarly predecessors among British diplomats in Japan, such as Ernest Mason Satow, William George Aston and John Harington Gubbins. The position also gave Sansom access to many Japanese scholars as well as political leaders. Sansom was promoted to Commercial Secretary from 1923. In 1926 Sansom was awarded the CMG (Companion of the Order of St. Michael and St. George). He was divorced in June 1927, but remarried at the end of May the following year. Also in 1928, Sansom published An Historical Grammar of Japanese. He followed this in 1931 with Japan: A Short Cultural History and in 1935 with a new edition of Sir Charles Eliot’s Japanese Buddhism, which had been left incomplete at the time of Eliot’s death. "