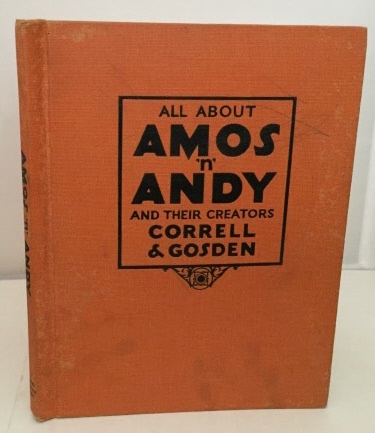 B&W Illustrations; This book is in Very Good condition and is lacking a dust jacket. The book and its contents are in generally clean, bright condition. The front cover has some ground-in dirt and spotting. There are stpos of beginning biopredation (color loss to the linen cloth). The frontispiece has been removed. "Amos 'n' Andy is an American radio and television sitcom set in Harlem, Manhattan's historic black community. The original radio show, which ran from 1928 until 1960, was created, written and voiced by two white actors, Freeman Gosden and Charles Correll, who played Amos Jones (Gosden) and Andrew Hogg Brown (Correll) as well as incidental characters. When the show moved to television, black actors took over the majority of the roles; white characters were infrequent. Amos 'n' Andy began as one of the first radio comedy series and originated from station WMAQ in Chicago. After the first broadcast in 1928, the show became a hugely popular radio series. Early episodes were broadcast from the El Mirador Hotel in Palm Springs, California. : 16871 The show ran as a nightly radio serial (192843) , as a weekly situation comedy (194355) and as a nightly disc-jockey program (195460)."

Title: All About Amos 'n' Andy And Their Creators Correll and Gosden

By: Radio Corporation Of America