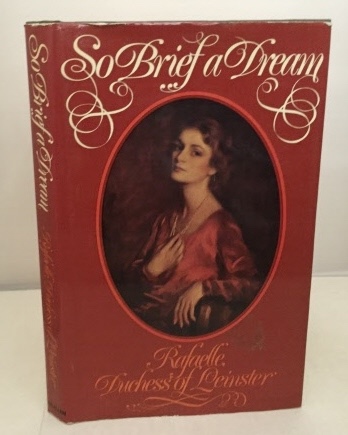 So Brief A Dream

By: Rafaelle, Duchess Of Leinster (with A Forword by Beverley Nichols)

B&W Illustrations; This book is in Very Good+ condition and has a Very Good+ dust jacket. The book and its contents are in mostly clean, bright condition. The spine ends and corners of the book have some beginning bumping. The text pages are clean and bright. The dust jacket has some light edge wear, bumping and rubbing. " Edward fell for Mrs Rafaelle Van Neck, and they married in 1932. After the war the Duke of Leinster and Rafaelle divorced. Then he met an ambitious lady called Jo. On 11 of March 1946 Jo finally achieved her ambition of becoming a duchess, even though it meant marrying a gambler who was 8 years younger than her. Edward tried to re-kindle his relationship with Rafaelle (his second wife) but was rejected so he attempted an unsuccessful suicide. After all, Jo refused to divorce the Duke (she did not want to give up her Duchess title) , remaining his wife to the end. "

Title: So Brief A Dream

Author Name: Rafaelle, Duchess Of Leinster (with A Forword by Beverley Nichols)

So Brief A Dream