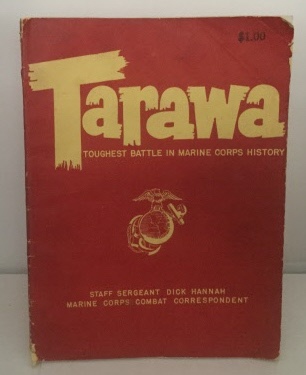 This is an oversized paperback book. The book is in Very Good- condition and was issued without a dust jacket. The book and its contents are in mostly clean, bright condition. The spine of the book has several cracks, some wear and rubbing along with edge nicking and the bottom spine end has chipped off (about half an inch's worth). There is an inked price on the top front corner of the front cover. The text pages are generally clean and bright, however, the endpapers have some noticeable foxing. "To call Tarawa the Toughest Battle in Marine Corps History is to make a very broad statement. That glorious history goes back to 1775 when green-clad Continental Marines were telling the world, with musket and tomahawk, America would be independent . Since then, around the globe - at Haiti, Tripoli, Chapultepec, Manila, Belleau Wood, Guadalcanal - U. S. Marines have made their name synonymous with battle at its toughest."