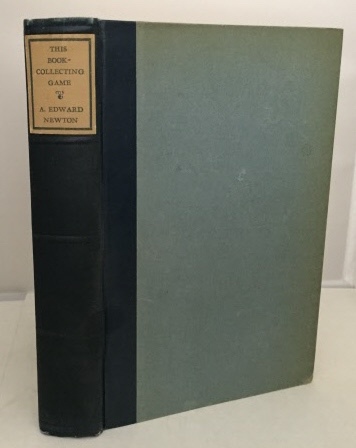 By: Newton, A. Edward

Color Illustrations; This book is in Very Good+ condition and is lacking the dust jacket. The spine ends and corners of the book covers have some light bumping and rubbing. The paper label on the spine of the book has some light toning. The text pages are clean and bright. There is a previous owner's bookplate on the front pastedown page. "Alfred Edward Newton (1864–1940) was an American author, publisher, and avid book collector. He is best known for his book Amenities of Book Collecting (1918) which sold over 25,000 copies. At the time of his death, it was estimated that he had approximately 10,000 books in his collection, focusing on English and American literary works, the major part of which were auctioned by Parke-Bernet Galleries, New York in April, May, and October 1941. Highlights of the sale included the autographed manuscripts of Thomas Hardy's novel Far From the Madding Crowd and Charles Lamb's essay Dream Children."