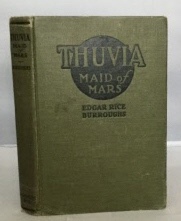 B&W Illustrations; This book is in Very Good- to about Very Good condition and is lacking a dust jacket. The book and its contents are in generally clean condition. The spine ends, bottom edges and corners of the book covers have some edge wear, rubbing and light, but noticeable fraying. The covers of the book has some light ground-in dirt and rubbing. The text pages are generally clean, though beginning to tone due to the acid content of the paper. The endpapers have noticeable generalized toning. There is a previous owner's radio call sign, name and address inked on the front endpaper, and also an inked name on the front pastedown page. Illustrated throughout with 10 full page illustrations by J. Allen St. John (including the frontispiece). The front hinge between the frontispiece and title page is starting. "Aiming his work at the pulps, Burroughs had his first story, Under the Moons of Mars, serialized by Frank Munsey in the February to July 1912 issues of The All-Story under the name "Norman Bean" to protect his reputation. Under the Moons of Mars inaugurated the Barsoom series and earned Burroughs US$400 ($9,927 today). It was first published as a book by A. C. McClurg of Chicago in 1917, entitled A Princess of Mars, after three Barsoom sequels had appeared as serials and McClurg had published the first four serial Tarzan novels as books. Burroughs soon took up writing full-time, and by the time the run of Under the Moons of Mars had finished he had completed two novels, including Tarzan of the Apes, published from October 1912 and one of his most successful series."