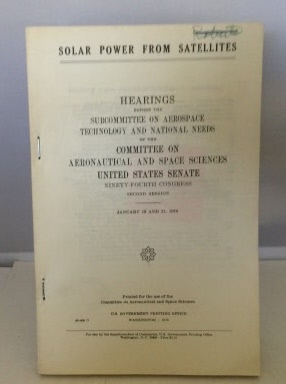 Solar Power From Satellites Hearings before the Subcommittee on Aerospace Technology and National Needs....

By: U. S. Government Printing Office

B&W Illustrations; This is a trade sized paperback book with self covers and a side stapling. The book is in Very Good+ condition and was issued without a dust jacket. The book and its contents are in mostly clean, bright condition. There is a previous owner's inked name on the top edge of the front cover. The text pages are clean and bright. There is a small crease / bump to the bottom edge of the rear cover. "Space-based solar power (SBSP) is the concept of collecting solar power in outer space and distributing it to Earth. Potential advantages of collecting solar energy in space include a higher collection rate and a longer collection period due to the lack of a diffusing atmosphere, and the possibility of placing a solar collector in an orbiting location where there is no night. A considerable fraction of incoming solar energy (55–60%) is lost on its way through the Earth's atmosphere by the effects of reflection and absorption. Space-based solar power systems convert sunlight to microwaves outside the atmosphere, avoiding these losses, and the downtime due to the Earth's rotation, but at great cost due to the expense of launching material into orbit. SBSP is considered a form of sustainable or green energy, renewable energy, and is occasionally considered among climate engineering proposals. It is attractive to those seeking large-scale solutions to anthropogenic climate change or fossil fuel depletion (such as peak oil)."

Title: Solar Power From Satellites Hearings before the Subcommittee on Aerospace Technology and National Needs....

Solar Power From Satellites Hearings before the Subcommittee on Aerospace Technology and National Needs....