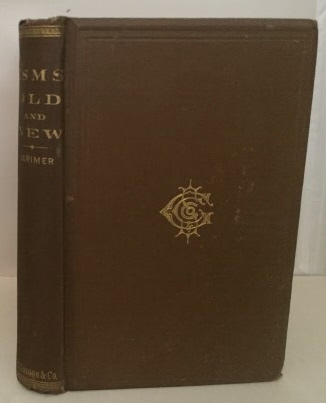 This book is in Very Good+ condition and is lacking a dust jacket. The book and its contents are in generally clean, bright condition. The spine ends and corners of the book covers have some light bumping and rubbing. The front cover has spots of discoloration. The text pages are clean and bright. There is a previous owner's inked name on the front endpaper and front free page. "George Claude Lorimer (June 4, 1838 – September 8, 1904) was a noted reverend, and was pastor of several churches around the United States, most notably the Tremont Temple in Boston, Massachusetts. Born in Edinburgh, Scotland, Lorimer came to the United States in 1856 in the hopes of becoming an actor. Coming eventually to Louisville, Kentucky, he came under the influence of Reverend W. W. Everts, who turned Lorimer to Christianity. Lorimer graduated from Georgetown College, Kentucky, in 1859. He was ordained in the Baptist Ministry, first holding brief pastorates in Harrodsburg, Kentucky and Paducah, Kentucky, and then for eight years at the Walnut Street Baptist Church in Louisville, Kentucky."