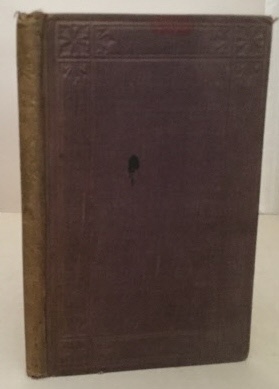 The Two Heaps: And What Miss Brown's Sunday School Clas Did About Them

This is a small format book. The book is in Very Good condition and was issued without a dust jacket. The spine and corners of the book cover has noticeable fading and there is some light bumping, rubbing and fraying. There are a couple of small spots of discoloration to the covers. The text pages are mostly clean and bright. There is a previous owner's inked name on the front pastedown page. "Like many of the 19th-century women who wrote series for children, Katherine Kent Child Walker (Mrs. Edward Ashley Walker) came from a religious background. And, like several of her counterparts, she drew on her own life for some of her publications, especially after her marriage. In contrast with many married series authors, however, Walker wrote her juvenile series when she was single. After her marriage, most of her publications were in periodicals. Whether writing articles for adults or relating anecdotes about her daughter for children's magazines, Walker often adopted a light-hearted tone, and her best-known piece is the humorous "The Total Depravity of Inanimate Things" (1864)." (19th Century Girls Series website)

Title: The Two Heaps: And What Miss Brown's Sunday School Clas Did About Them

The Two Heaps: And What Miss Brown's Sunday School Clas Did About Them