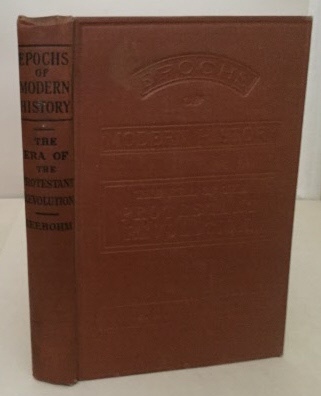 The Era Of The Protestant Revolution

This book is in Very Good+ condition and is lacking a dust jacket. The book and its contents are in mostly clean, bright condition. The spine ends and corners of the book covers have some beginning bumping and rubbing. There is a small spot of discoloration to the front cover. The text pages are clean and bright. There is a previous owner's inked name on the front pastedown page. "Though he was a well-respected legal mind, it was as a social and economic historian that Seebohm truly made his mark. Notably, his seminal work English Village Community (published in 1883) placed him in the foremost rank of economic historians. Before this work, the prevailing view held that primitive Anglo-Saxon society consisted of communal groups of freemen holding land in common ("the Mark"). However, due to continual aggression from native and foreign leaders, the village community was held to have degenerated over time into a more hierarchical social structure ("the Manor") , in which the tenants, originally free, became serfs. However, Seebohm's analysis demonstrated that there was no satisfactory ground for believing that the free community ever existed in England." (From Wikipedia)

Title: The Era Of The Protestant Revolution

The Era Of The Protestant Revolution