B&W Illustrations; This is an official football program for the homecoming game between Indiana University and University of Wisconsin (Oct, 23, 1943). The program is in Very Good- condition and was issued without a dust jacket. The spine of the program has rubbing, wear and tearing. The covers and text pages have a vertical crease and there is edge wear and a small tear to the foredge. The text pages are generally clean and bright. "The Indiana Hoosiers football program represents Indiana University Bloomington in NCAA Division I Football Bowl Subdivision college football and in the Big Ten Conference. The Hoosiers have played their home games at Memorial Stadium since 1960. The team has won the Big Ten Championship twice, once in 1945 and again in 1967. The Hoosiers have appeared in eleven bowl games, including the 1968 Rose Bowl. Numerous Indiana players have been inducted into the College Football Hall of Fame, including Zora Clevinger, Bill Ingram, Pete Pihos, George Taliaferro, John Tavener, and Anthony Thompson, who was also National Player of the Year in 1989." (from Wikipedia) 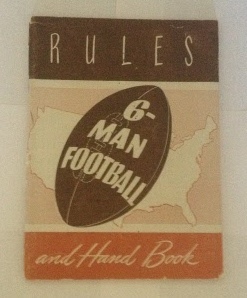