The book is still in original shrinkwrap. This book is in Fine condition and has a Fine dust jacket. The book and its contents are in clean, bright condition. The text pages are clean and bright. The dust jacket is crisp and clean. "The series was chiefly inspired by the poem "Childe Roland to the Dark Tower Came" by Robert Browning, whose full text was included in the final volume's appendix. In the preface to the revised 2003 edition of The Gunslinger, King also identifies The Lord of the Rings, Arthurian Legend, and The Good, the Bad and the Ugly as inspirations. He identifies Clint Eastwood's "Man with No Name" character as one of the major inspirations for the protagonist, Roland Deschain. King's style of location names in the series, such as Mid-World, and his development of a unique language abstract to our own (High Speech) , are also influenced by J. R. R. Tolkien's work. " (from Wikipedia)

The Dark Tower II: Drawing of the Three 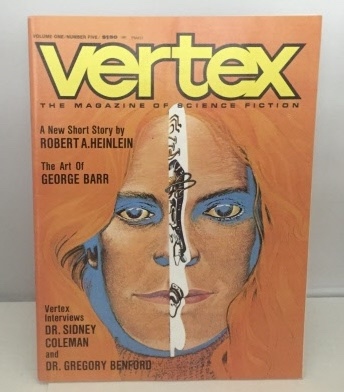 No Bands Playing (heinlein) / Dark, Dark Were The Tunnels (martin) In Vertex Magazine

The Great And Secret Show