The following is a beautiful archive of autograph letters with envelopes (mostly) from Juanita Miller to her father from Sept 1908 through March 21, 1911. Also included are several extra items including one autograph letter from Joaquin Miller to his daughter and several letters relating to either Juanita or Joaquin. "Cincinnatus Heine Miller (September 8, 1837 - February 17, 1913), better known by his pen name Joaquin Miller, was a colorful American poet and frontiersman. He is nicknamed the "Poet of the Sierras" after the Sierra Nevada, about which he wrote in his Songs of the Sierras (1871)." (From Wikipedia.) His daughter Juanita (Juanita Joaquina Miller -daughter of Joaquin Miller and wife Abbie Leland Miller was born in New York City in 1880. Miss Miller lived at Joaquin Miller's locally famous home, "The Heights," in Oakland, California, and was an active participant in the Oakland performing arts community until the 1960s.) She studied music in New York and was a sometime composer of music which produced to accompany her father's poems / lyrics. She was famous more for her father's well respected name than anything she herself did and was a flamboyant and rather eccentric character well known in the San Francisco Bay area from the 1930's on. The archives consist of:*Five holograph letters to Joaquin Miller from his daughter dated September 21st, 1908 - Dec 26th, 1908 in hand addressed envelopes.*Seven holograph letters to Joaquin Miller from his daughter dated February 1, 1909 - November 5th, 1909, in hand addressed envelopes.*Ten letters to Joaquin Miller from his daughter dated March 12, 1910 - December 14th, 1910, in hand addressed envelopes.*Five letters to Joaquin Miller from his daughter dated March 17th, 1911 - March 21st, 1911: all of these letters are addressed to Fabiola Hospital, Oakland, CA. (in hand addressed envelopes). (The Fabiola Hospital was built in 1887 at the intersection of New Broadway and Moss Avenue (now Broadway and West MacArthur Blvd.) on 2-1/2 acres of land donated by Anthony Chabot. This new hospital was the work of the women club members of the Fabiola Association who envisioned a comfortable environment for the underprivileged. The Oakland Kaiser Permanente complex literally stands on the same site as the Fabiola Hospital. 1Fabiola Hospital, Oakland, California 1Kate Kirkham learned of the need for a local hospital in Oakland after witnessing a terrible carriage accident in 1877. The victim had to be transported 10 miles to a hospital in San Leandro. $50 was collected from 18 of her women friends and the Fabiola Association was formed. The focus of the group was to provide medical assistance for all, regardless of financial circumstances. The name Fabiola comes from Saint Fabiola, a woman in 4th century Rome who started the first hospital for sick and needy travelers.*A five page holograph letter from Juanita Miller to her father dated May 10, 1909 in a hand addressed envelope which discusses her graduation (from music school) and plans for travel and goes on to mention that she would like to be independent: "it is really wicked for me to be dependent any longer & mother will not allow me to teach, she considers it unlady-like, she is also so fearful lest I sing (?) but do something without her knowledge." *An envelope (with the address of Harris and Ewing Photographers 1311 F. Street N.W. Washington D.C. which includes a holograph request by Margaret E. Harrington for Miss Miller to perform her father's poem "Columbus" for a group of pupils (undated). The envelope also includes a typed letter hand signed by Juanita Miller to her father discussing her mother's stifling of her career and life and how she would like to live with her father in Oakland but not sure she could flout her mother's wishes. Also included is a newspaper clipping regarding Juanita Miller (undated).*A holograph four page letter from Juanita Miller to an unknown recipient which mentions her father's illness and fighting spirit (there's much more to the letter, but the handwriting is difficult to read). This letter does not include an envelope and is undated. *A two page (half page letterhead from the Fabiola Hospital Association) dated March 8 (1911?) holograph letter from Joaquin Miller at Fabiola hospital - the handwriting is nearly illegible, but appears to be a note of love and care to his daughter . *A single page (half page letterhead from the Fabiola Hospital Association) , undated (assumed to be during March 1911), holograph letter from an attendant at Fabiola Hospital giving an update on Joaquin Miller's condition which was not improving and was partly due to nerves (according to the writer). *Four newspaper clippings regarding Juanita or Joaquin Miller (one from the Oakland Tribune dated Wed. Sept 25, 1968).*A flyer from AMORC (Rosicrucians) to Miss J J Miller.*Eight 8x10" photos (a couple of them have been cut down) of Juanita Miller posing for the camera (Includes duplicates of the same pose). One photo shows her in front of a small wooden cabin of some sort, the other could be a back garden (?)The letters vary in length and in content, but generally cover Juanita's daily life, her work with music and music study, her controlling mother and her desire to come and live with her father. There are instances throughout many of the letters where she discusses something to do with her father's writing, either receiving proof copies of something he wrote, discussion of something she read about or by him, etc. etc. Also the letters give an interesting look at the peripatetic lifestyle Juanita Miller had during this period of time - the letters are sent from a number of different places and she visits, or mentions many friends / acquaintances in her travels.

Title: Archive of Material Relating to Juanita Miller and her Father Joaquin Miller 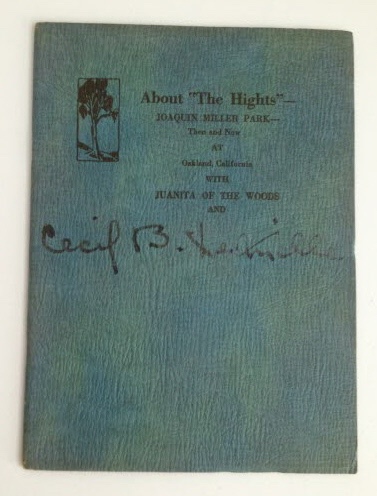 About The Heights Joaquin Miller Park - Then and Now At Oakland, California with Juanita of The Woods and (Cecil B. De Mille) 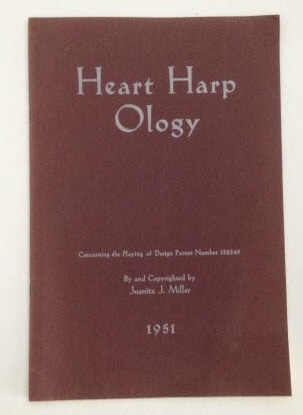 By: Miller, Joaquin (words by) with Music by Juanita Miller

In Classic Shades And Other Poems 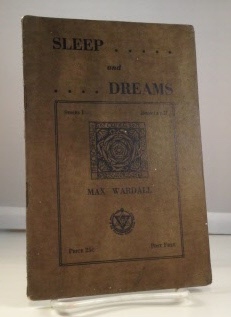 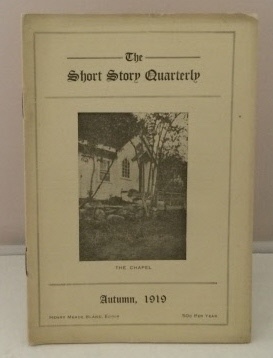