I Looked and I Saw Mysteries... Book 2

This is a small format booklet with cardstock covers and a stapled spine. The booklet is in Very Good condition and was issued without a dust jacket. There is some beginning bumping to the bottom spine end of the booklet, and very beginning toning to the rear cover. The text pages are clean and bright. There is a previous owner's inkstamped name and address on the front inside cover, followed by the previous owner's rambling handwritten note. This is the second book of visions received by an Argentine evangelist. " "In January of 1949, I came to what appeared to be the bitter end of my missionary career. With another missionary, Robert T. , we went to a town named Lavelle (the valley) that lay in the foothills of the great Andes Mountains. Our purpose was to hold a Gospel crusade in a town where, to our knowledge, the Gospel had never been preached before. We fully believed that in that totally churchless town, we would be privileged to see the mighty wonders and see the power of the Holy Spirit manifested before out eyes and see a great spiritual impact on that town. We fully expected to see manifestations such as had happened in the days of my childhood in the old Baptist Church in Ashland, Oregon. With great anticipation we prepared a tent with what we considered to be proper evangelical accouterment. We labored happily in the hot Andean sun. We dutifully filled the air with recorded music and faithfully visited every home in the community, distributing tracts and Gospel portions. We prayed many hours daily and prepared fine messages for the great congregation we expected to come. Night after night we held a find service, but . . . Not one single person attended – not even a child came to see if the tent might be a circus. Then came the torrential rains and flooded us out, but we still kept on. Yet in spite of all our efforts, witnessing, testifying and preaching, we still had a zero congregation. The strong man of Argentina ruled contemptuously over every city, large and small. After two weeks of expense and labors, we were forced to retreat in bitter disappointment and failure. We had absolutely no fruit for our labors. For me, that defeat marked the end of a long trail and the beginning of a new one." "

Title: I Looked and I Saw Mysteries... Book 2 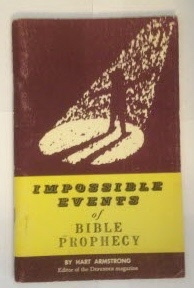 I Looked and I Saw Mysteries... Book 2