B&W Illustrations; This is an oversized paperback book. The book is in Very Good condition and was issued without a dust jacket. The book covers have some toning / yellowing to the spine and the page edges. The text pages are clean and bright. "Under the auspices of the U. S. Army Air Service, the Fokker T-2 made the first nonstop U. S. Transcontinental flight in 1923. Two failed attempts at a west-to-east crossing were followed by a successful east-to-west flight when Air Service Lieutenants Oakley Kelly and John Macready took off from Long Island, New York, on May 2 and landed at Rockwell Field, San Diego, California, on May 3, slightly more than 26 hours and 50 minutes later. The airplane was the fourth in a series of transport designs by famed Dutch manufacturer Anthony Fokker and his chief designer, Rheinhold Platz. Manufactured as a Fokker F-IV, the aircraft was purchased by the U. S. Army Air Service in June 1922 and re-designated the Air Service Transport 2, or T-2. Required modifications for the transcontinental flight, such as increasing the fuel capacity, making structural reinforcements, and adding a second set of controls, were carried out at McCook Field, Dayton, Ohio." (Smithsonian Air and Space Museum website)

Saftey In The Jet Age

The Lone Scout Of The Sky The Story of Charles A. Lindbergh 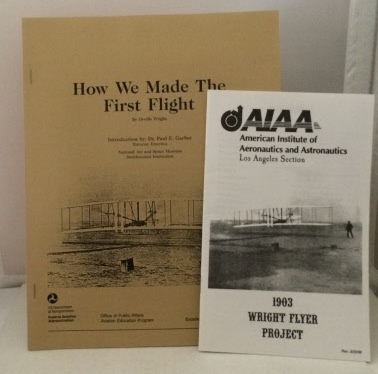 How We Made The First Flight / 1903 Wright Flyer Project