This book is in Very Good+ to Near Fine- condition and has a Near Fine dust jacket. The book and its contents are in clean, bright condition. There is one small, light bump to the bottom spine end of the book cover with a tiny bit of rubbing. The text pages are clean and bright. The dust jacket is clean and bright. "Timothy Thomas Powers (born February 29, 1952) is an American science fiction and fantasy author. Powers has won the World Fantasy Award twice for his critically acclaimed novels Last Call and Declare. His 1987 novel On Stranger Tides served as inspiration for the Monkey Island franchise of video games and was optioned for adaptation into the fourth Pirates of the Caribbean film. Most of Powers' novels are "secret histories". He uses actual, documented historical events featuring famous people, but shows another view of them in which occult or supernatural factors heavily influence the motivations and actions of the characters. " (from Wikipedia) 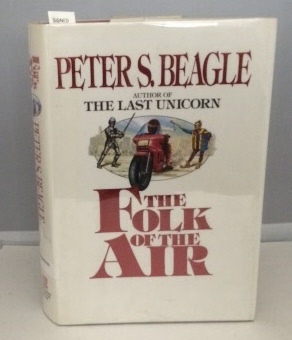 The Folk Of The Air

Have Spacesuit - Will Travel Three Parts - True First Edition, Featured in the Magazine of Fantasy and Science Fiction

By: Heinlein, Robert A. (edited by Anthony Boucher) The Magazine Of Fantasy and Science Fiction

The Gate Of The Cat