This book is in Near Fine condition and has a Near Fine dust jacket. The book and its contents are in clean, bright condition. The text pages are clean and bright. The dust jacket is crisp and clean. "While much of Ballard's fiction would prove thematically and stylistically provocative, he became best known for his relatively conventional war novel, Empire of the Sun (1984) , a semi-autobiographical account of a young British boy's experiences in Shanghai during Japanese occupation. Described by The Guardian as "the best British novel about the Second World War", [4] the story was adapted into a 1987 film by Steven Spielberg starring Christian Bale. In the following decades until his death in 2009, Ballard's work shifted toward the form of the traditional crime novel. Several of his earlier works have been adapted into films, including David Cronenberg's controversial 1996 adaptation of Crash and Ben Wheatley's 2015 adaptation of High-Rise. " (from Wikipedia)

The Facts Behind The Helsinki Roccamatios (Short Fiction) 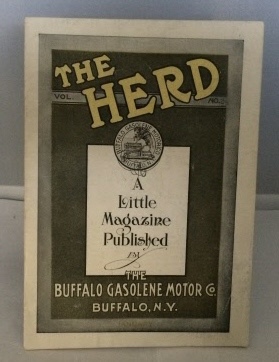 The Herd : A Little Magazine Published By The Buffalo Gasolene Motor Co.

Cards on the Table